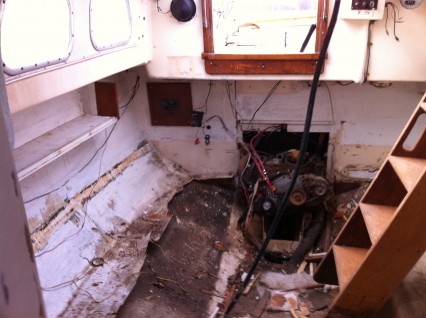 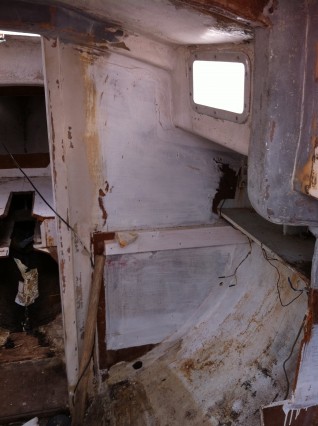 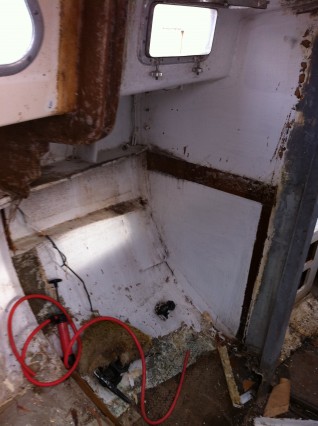 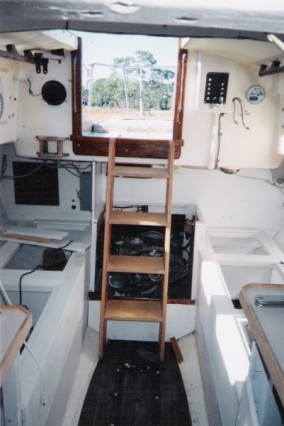 This one is sad, as the boat is dead. I bought the boat from Jerry in Florida because his health was bad and he wanted someone to fix her up. It seems that the PO he bought it from caught the port shrouds in a pile while under sail. All the port chain plates were pulled out or loose and the original mast was snapped in half. My PO bought the boat and started to restore her, but got sick and could no longer continue. He had bought a new (upgraded) mast, roller furl, stove/oven, etc., but it all went into the garage.

Time went by, and the boat sat in the Florida sun and heat with stagnate water up to the head thru-hole. The tires on the trailer (oh yes, a self launching sailor trailer too) began to rot, water in the wheel bearings, etc., so he decided to sell her. I guess I was the third guy to come all the way out to see her. My wife and I looked her over and realized that she was a deal for the price, but it would take too long to fix up. We told the PO that we were going to pass, but he misunderstood and started crying in happiness that she was going home to be fixed. I looked at my wife and we ended up getting her. We got two pickup truck loads of stuff from the garage. We towed it to a marine dealer near by who had some storage and fixed the bearings. I also got new tires. On a later trip to Florida, we picked it up and drove back to Ohio. (I wish I could have got breaks before hitting the mountains, but that didn’t come for another year…)

So #66 ended up in my brothers barn for the winter. The Yanmar was marginal, but the exhaust manifold had broke on the drive north. After gutting the rotten interior, she sat for the winter. Over the winter I planned and schemed. I had it all figured out, but… we wanted to go sailing sooner. Now, I bought the whole lot for less than the trailer should have run (ok, by the time I did the breaks, bearings and tires, it was a fair value). So, I started looking around for a B27 in sail-away condition that we could use while I build my custom interior on #66. We ended up finding #356 out in North East, MD for a good price. So now I had to get #66 off the trailer at my brother’s farm and build a shed around it while I slowly worked away. Well, that’s when disaster hit. We rolled the B27 off the trailer by securing it to a tractor (big one) and then me driving out from underneath it. With the boat secured port & starboard, she should stand right up there. I had even bought a cradle that we were going to cut and slip into place. But… in order to get the rollers under her, I made the decision to use a bottle jack under the forefoot of the keel to lift against the lead to get her up. I knew I would have a single 1.5” hole to fix when it was all over. Well, we got it rolled off the trailer, but she listed down in the bow – l lot. I have a picture of me and my brother with our arms on the top of the bow pulpit. It was at about this time we noticed the water flowing out of the keel. Not bilge water, but a good 2-4 quarts of water that was in the matrix of the keel FRP. Well that was it. I could live with redoing an interior, and the deck (which was fairly solid), but I was NOT going to play games with the keel.

Since it got down below zero several times over the winter, my assumption has been that the freezing has separated layers in the keel. So, I have been salvaging all the parts off the boat and then the keel will be cut to recycle the lead. After that, she is going to the landfill. Like I said, a sad story. The good news is that most of the hardware will go directly to #356 to upgrade her.