In April 2018, a Bristol 27 sailboat successfully completed a trip around Cape Horn. The sailboat is named “Steppin Out” and is captained by Daniel Bravo and crew.  Here’s a picture of this well traveled little boat:

Steppin Out sits in a marina in Piriapolis, Uruguay, ready to start the journey around Cape Horn.

Here’s an image of the crew who made the journey: 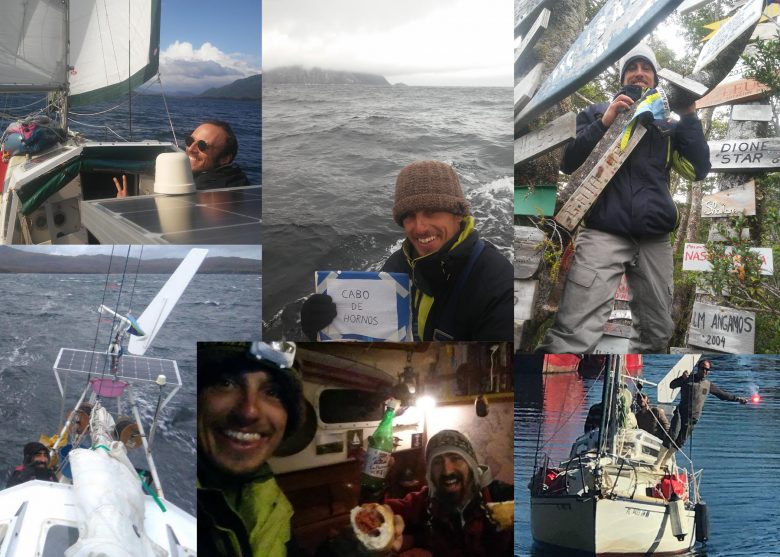 Steppin Out crew who made the difficult journey possible.

And here’s an image of the starting and ending points of the journey:

Steppin out started this leg of the journey in Piriapolis, Uruguay, rounded Cape Horn, then finished in Valdivia, Chile.

Captain Daniel wrote a very nice article covering the trip. The article along with images of the trip is posted on Steppin Out’s page found here – https://www.bristol27.com/bristol-specific/hull-352-steppin-out.  Here’s some of my favorite quotes from the article:

….sailing Cape Horn is like (and its always been compared to) climbing Mount Everest, it’s the only expedition in sailing that reaches one specific point, has a huge load of history associated with it and represents a challenge where many people fail or give up one way or another. Crossing an ocean is similar, but, in most cases, technically a lot easier, unless you choose some exotic route.

I’m doing it simply because I felt it, because it is a long desired pilgrimage done in an almost religious way to the maximum temple of my faith: The ocean. Furthermore, if I’m doing it on a 27 foot boat with a 10 horse power engine is because of one simple and mundane reason: It’s the (only) boat I have.

Steppin’ Out is a well-used and well proven Bristol 27, the usual hard core, old school offshore sailboat: Cheap, sturdy as hell, reliable as an ox and slow, very slow. She has crossed the Atlantic twice in my hands and by now I have modified every weak point and every possible trouble source

you´ll always find good reasons to postpone a journey, so if the wind blows, you set sail and slowly deal with your fears as you become part of the offshore landscape.

Our sailing strategy was very simple: stay close to the shore and enjoy the wind without fetch to allow for a sea state to develop. It’s an easy game, if you see a “bomb” coming from the west, you run for your life to the shore and stay sailing there at perfect sight of the coast, some 5 to 10 miles offshore and either anchor pretty much wherever you want, or keep sailing along the shore on a very fast and frenetic close reach.

At the Club they have an understanding of sailing as poetry, this very rare occurrence of a club that sees the redeeming relevance that the ocean and the wind have for a person’s soul.

we turned on the engine, hoisted as much sail as we could, disconnected the self-steering and made 6 knots average on a wild reach right towards the shore, no questions asked, all steam full ahead

if there is a good [weather] window, you sail, you don’t stop

A calm, at these latitudes is a good thing, a very, very good thing. One thing you know for sure is that, once it is gone, the calm won’t be followed by a nice 15 to 20 knot breeze, but will be followed by something described in most forecasts with blood-red tones.

Many people ask, “Well, how is sailing the cape?” I guess the answer is, “Like sailing around any other small island in the world.” Because once you have broken your nerves all along the Argentinian coast, feared for any possible failure, mistake, change of tide, anchor drag, ripped sail at the wrong moment, etc. sailing around The Horn is just one more step…if you have satellite forecast, like we had, without that, approaching that area of the ocean, at least on a boat like ours would be, in my honest opinion, close to suicidal. We were even feeling too sure of ourselves, Mane and I were talking about the “right way” to sail The Horn, maybe we should agree to not use the engine during that short passage, maybe we should pass from east to west, or west to east… we were discussing as if our desires, our stupid and arrogant human pretensions, our wish to build a meaningful moment, our understanding of what was “correct” or “cheating”, was of any relevance to the ocean.

A very strong series of williwaws (sudden, violent gusts) developed inside the bay. The wind outside was strong, but inside was very close to unmanageable, we found ourselves very quickly under storm canvas, engine pushing and Steppin’ still being carried towards the uncomfortably close lee shore. After a couple of hours of stressful struggle, we made it into the bay and everything seemed peaceful again, but we had gotten the answer that we were waiting for: here, it is the ocean who decides how you sail, and to willingly spare any of the available resources is foolish at best.

To me, at 32, I had finally gathered the necessary resources, the experience, the time to accomplish something that I had dreamt of since I was a kid….After almost 8 years specifically trying to make it, I had finally crossed in front of The Horn. Who is to say what is harder and what is not? What is a challenge worth accomplishing and what is an everyday trip? I sunk a boat, crossed the Atlantic five times before arriving to this moment, put all the savings and material capacity of my whole life into this, the same way that someone maybe put all that effort to cross the Atlantic, the Bay of Biscay or maybe just the Solent or the narrow sea between Florida and The Bahamas… the weight of the experience is within each one, it is not The Cape, nor is it one particular bay or ocean, it is the relevance of having a dream and fulfilling it, no matter how hard, how long or short, how far or how near. The Horn is, I’ve always thought, a temple, maybe it is the temple, the monument, erected by the gods to our capacity to dream.

As soon as we set foot in Williams we were informed of two things: first from customs: “You have 15 days to pay 35% of the price of your boat in taxes, or the boat will be confiscated at the end of this dead line”, then it was the navy: “you sailed Cape Horn coming from Argentina without authorization from the Chilean government and without formally entering the country first, the navy requires you to have an interview with the port captain”.

now there was no way around it: everyday was an eternal series of tacks, hand steering under the rain and cold, always in the cockpit, making between 15 to 30 miles per day…: A wet and exhausting task, without technical sophistication or glamour, just hard core, old school, slow progress….100 miles doesn’t sound like much, even Steppin’ has made 100 miles in 24 hours… It took us two weeks. Two painful, long, upwind weeks.

some of the passing gusts heeled her right to the side of the cabin, temporarily submerging the salon windows, sleeping was hard, keeping your mind off of the fear of having one rope break was almost impossible.

there was one day, I remember it very well, one day that we sailed and we enjoyed it, we turned the engine off…there was a decent breeze from the south, it was sunny, we put music from Silvio Rodriguez and looked at the sun, the mountains, the shiny water and we felt alive, we were still very, very far from our destination, still south of Eden, but it felt sooo good, the light of the sun fell on us like a rain of hope and fulfilment….I remember we had that one beautiful day.

easy days, good company, laughs and dinners in the salon of “Otra Vida”. With them we shared not only our passion for sailing but also the fairly concrete idea that life can be lived in a more meaningful, deliberate and less consumerist way. Principles and ideas that, incidentally, had been tested very deeply during the prior weeks when the comforts of established society looked, to be honest, rather attractive.

We dropped anchors and shore lines in Caleta Suarez where two big fishing boats soon joined us to avoid the incoming bad weather. We attached Steppin’ to the fishing boats that were attached to each other and the usual seamen’s community soon developed “Come to have lunch”, “Let’s have dinner”, “Let’s drink some mate” and soon we were all friends, all partners surrounded by stories of salty fear, success or failure. The crews were resting, waiting, cooking, doing maintenance or preparing fishing gear and hooks.

writing this is merely an excuse to arrive to this moment, the moment to say thanks. The only way I can pay tribute to the people who made this actually possible is to write and tell the story, share the idea that with few material resources but loads of good friends and support, weird things can be done. It would appear that the main character of the story is me, this is an unfortunate yet unavoidable condition, but I was not alone on that boat, not only because I was actually not alone, but with us there was a huge amount of people pushing us forward and this was a massive team effort. This, to all of them…This project started many many years ago, and many many miles away, some friends are far but never forgotten